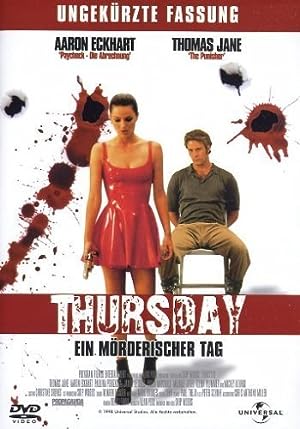 How to Watch Thursday 1998 Online in The UK

The cast of Thursday

What is Thursday about?

The movie opens in a Los Angeles convenience store one late Monday night, where a smalltime drug dealer named Nick (Aaron Eckhart) is trying to decide what coffee brand to buy. His ex-lover Dallas (Paulina Porizkova) and fellow hitman Billy Hill (James LeGros) are getting impatient and tell him to hurry up. Conflicts between Nick and the cashier (Luck Hari) ensue, resulting in Dallas shooting the cashier dead. Though the three attempt to cover up the crime, they are forced to also shoot a police officer (Bari K. Willerford) when he discovers blood on the ground.

Where to watch Thursday