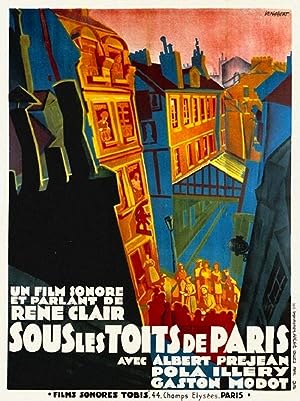 The cast of Under the Roofs of Paris

What is Under the Roofs of Paris about?

While singing in a lower class quarter in Paris, the street singer Albert falls in love with the Romanian party girl Pola, who is the companion of the gangster Fred. One night, Albert meets with Pola, who has just found that Fred had stolen her key, and his friend Louis proposes to toss to date her. However, Albert brings her to his room and they spend the night together, with Albert sleeping on the floor and Pola on his bed. Early in the morning, the pickpocket Émile brings a bag with stolen pieces and asks Albert to keep the bag for him. When the police busts Albert's room and finds the stolen goods, he is arrested and sent to jail. Meanwhile Fred travels and Pola seeks comfort with Louis, and they stay together. When Émile is arrested by the police, he confesses that Albert is innocent and he is released and seeks out Pola. Meanwhile Fred returns to Paris and also seeks out Pola that is with Louis. The three men that are under the spell of the gorgeous lady dispute her love and only one wins.

Where to watch Under the Roofs of Paris

More Comedy movies like Under the Roofs of Paris

More Comedy tv shows like Under the Roofs of Paris