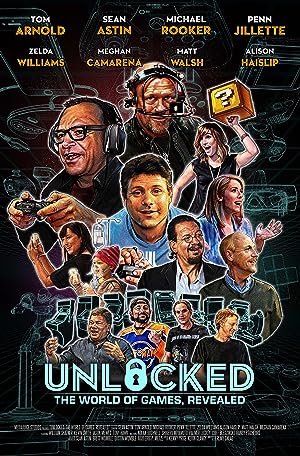 How to Watch Unlocked: The World of Games, Revealed Online in The UK

The cast of Unlocked: The World of Games, Revealed

What is Unlocked: The World of Games, Revealed about?

Follow 8 celebrity personalities each on their own individual "gaming journeys" to unlock various aspects of the video games industry. Sean Astin visits two of the world's leading game design schools talking with professors and students as well as diving into the world of video-game journalism and history. Tom Arnold takes a journey through the past, present and future of video game development while Michael Rooker spends some time on a motion capture stage specifically designed for gaming. Matt Walsh travels to USC where he speaks with industry professionals about the psychology of game design and game play itself. Zelda Williams goes to Children's Hospital Los Angeles where she meets patients and physicians and learns all about how gaming is being used as a tool for rehabilitation and pain management. Consumate gaming host Alison Haislip gets unprecedented access to the legendary game company Nintendo where she interviews industry icons like Shigeru Miyamoto, Reggie Fils-Aimee and even gets to meet Mario himself! Youtube sensation Meghan "Strawburry 17" Camarena is our consummate Esports hosts following Riot Games' annual "League Of Legends: Championship Series" from Los Angeles to New York and Berlin. Finally Unlocked Director Jeremy Snead gets the opportunity to talk gaming with icons William Shatner, Kevin Smith & Jason Mewes as well as skate icon Tony Hawk.

Where to watch Unlocked: The World of Games, Revealed

More Documentary movies like Unlocked: The World of Games, Revealed