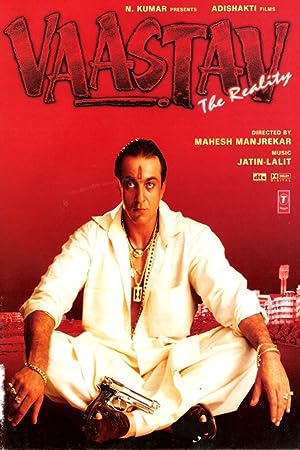 How to Watch Vaastav: The Reality 1999 Online in The UK

The cast of Vaastav: The Reality

What is Vaastav: The Reality about?

Raghunath Namdev Shivalkar (Sanjay Dutt) and his best friend Dedh Footiya (Sanjay Narvekar) struggle to find work in Mumbai. They decide to run a pav bhaji stall.But fate steps in when Raghu accidentally kills a customer who turns out to be the brother of a notorious gangster, Fracture Pandya and end up in the Mumbai underworld. Vitthal Kaanya (Ashish Vidyarthi), a rival gang lord, offers Raghunath and Dedh Footiya protection and later hires them both as hitmen. Raghunath becomes a respected hit man, with Dedh Footiya as his accomplice. With Raghunath in his gang Vitthal Kaanya hits a peak in the Mumbai underworld. He is protected by a politician who uses Raghunath for his needs. While BabbanRao (Home Minister) relies on Raghunath, there are some others who despise Raghunath, and are just waiting in the sidelines to see when Raghunath makes an error. Raghunath does so, and hence becomes an embarrassment for BabbanRao. Soon Raghunath is on the run, both from the police, and BabbanRao's men. Raghunath knows now that he must protect his wife, parents, and family, as they too are in danger. Then Raghunath comes to know that the police have been ordered to kill him in an "encounter", and Raghunath now realizes that there is no escape from this harsh reality. Unable to save himself from police, Raghu comes back to his home and asks his mother to shot him down for a graceful end of life. His mother does the same and his wife doesn't stop her from doing this.

Where to watch Vaastav: The Reality