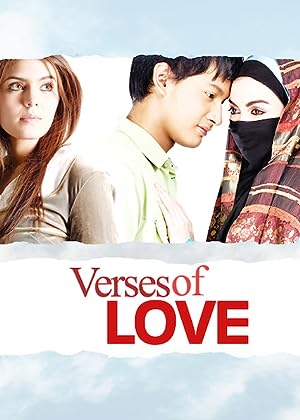 How to Watch Verses of Love 2008 Online in The UK

The cast of Verses of Love

What is Verses of Love about?

This is a love story. But not just a simple love story. It's about how to deal with the ups and downs of life's problems in the Islamic way. Fahri bin Abdillah is an Indonesian student trying to reach his master's degree in Al-Azhar. Fatigue with the dust of Egypt. Dwell with a variety of targets and simplicity of life. Persisting with being a translator of religious books. All Fahri's targets were enthusiastically excited except one: getting married. Fahri is an obedient man who is so straight. He does not know the courtship before marriage. He is less articulate when confronted with a creature named woman. There are very few women close to him all along. His grandmother, his mother and his sister. Moving to Egypt made that change. It was Maria Girgis. One flat neighbor who is a Coptic Christian but admire the Qur'an, and admire Fahri. Admiration turned into love. Unfortunately, Mary's love is only poured in the diary only. Then there is Nurul. The son of a famous kyai who also dredge knowledge in Al-Azhar. Actually Fahri put heart on this sweet girl. Unfortunately his sense of inferiority that only a son of farmers made him never show any taste to Nurul. While Nurul was hesitant and always guessing. After that there is Noura, also a neighbor who always tortured his own father. Fahri was full of empathy with Noura and wanted to help her. Unfortunately only empathy. No more. But Noura is expecting more. And later this becomes a big problem when Noura accuses Fahri of raping her. Last Aisha appeared. The beautiful eyes that bewitch Fahri. Since an incident on the metro, when Fahri defended Islam from allegedly stodgy and rigid accusations, Aisha fell in love with Fahri. And Fahri also can not lie to his heart.

Where to watch Verses of Love