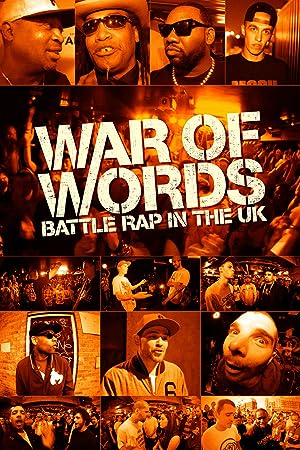 How to Watch War of Words: Battle Rap in the UK 2016 Online in The UK

The cast of War of Words: Battle Rap in the UK

What is War of Words: Battle Rap in the UK about?

WAR OF WORDS is an energizing, controversial and inspiring feature documentary that lifts the lid on the fast growing UK Battle Rap scene. The documentary is an examination of an exciting subculture of youth in the UK today; their creativity and work ethic, their passion for language and ability to control their own destiny. It investigates freedom of expression and respect for other cultures and lifestyles. While the language is often harsh and unflinching, the 'anything goes' philosophy of the battle arena results in one of the most harmonious and creative scenes in youth culture. The film is a truly entertaining expose on how the UK has embraced this American art form, creating one of the most exciting youth subcultures happening right now .

Where to watch War of Words: Battle Rap in the UK

More Comedy movies like War of Words: Battle Rap in the UK

More Comedy tv shows like War of Words: Battle Rap in the UK