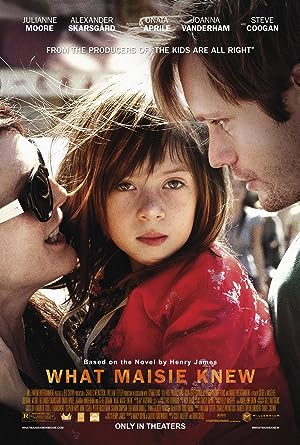 How to Watch What Maisie Knew 2012 Online in The UK

The cast of What Maisie Knew

What is What Maisie Knew about?

WHAT MAISIE KNEW is a contemporary New York City re-visioning of the Henry James novel by the same name, written by Carroll Cartwright and Nancy Doyne. It revolves around unwitting 7-year-old Maisie, caught in the middle of a custody battle between her mother Suzanna, an aging rock star, and her father, Beale, a major art dealer. In a race to win the court's advantage, Beale marries Maisie's nanny Margo, prompting Suzanna in turn to marry friend and local bartender, Lincoln. Both forced into a battle neither wishes to be a part of, Margo and Lincoln come to empathize with Maisie's position and over time with one another's. Teased by the notion of making their own surrogate family, the trio must either submit to the will of Maisie's parents or eventually face their wrath.

Where to watch What Maisie Knew