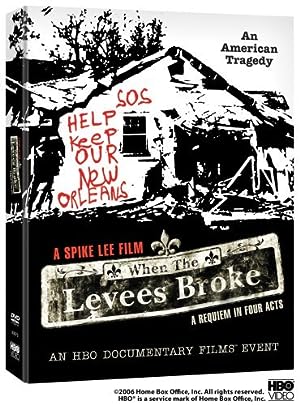 How to Watch When the Levees Broke: A Requiem in Four Acts Online in The UK

The cast of When the Levees Broke: A Requiem in Four Acts

What is When the Levees Broke: A Requiem in Four Acts about?

In August 2005, the American city of New Orleans was struck by the powerful Hurricane Katrina. Although the storm was damaging by itself, that was not the true disaster. That happened when the city's flooding safeguards like levees failed and put most of the city, which is largely below sea level, underwater. This film covers that disastrous series of events that devastated the city and its people. Furthermore, the gross incompetence of the various governments and the powerful from the local to the federal level is examined to show how the poor and underprivileged of New Orleans were mistreated in this grand calamity and still ignored today.

Where to watch When the Levees Broke: A Requiem in Four Acts

More Documentary movies like When the Levees Broke: A Requiem in Four Acts

More Documentary tv shows like When the Levees Broke: A Requiem in Four Acts